When CoverGirl announced its first male spokesmodel in James Charles, he was hailed as an inspiring figurehead for the diversity-in-beauty movement. Having sent out the tweet on Thursday morning, four hours later Charles had deleted it after it was met with backlash. 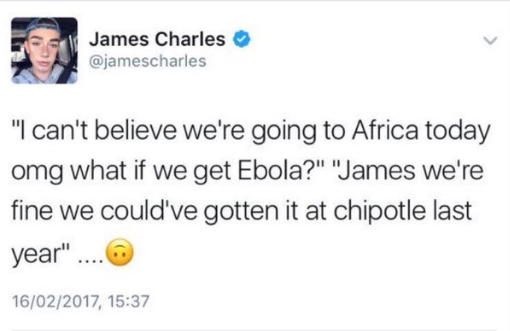 When CoverGirl announced its first male spokesmodel in James Charles, he was hailed as an inspiring figurehead for the diversity-in-beauty movement. Now, thanks to a racist “joke,” beauty fans are threatening to boycott the brand.

Headed on a school trip to South Africa, Charles tweeted the now deleted remarks, “‘I can’t believe we’re going to Africa today omg what if we get Ebola?’ ‘James we’re fine we could’ve gotten it at chipotle last year…’”

Having sent out the tweet on Thursday morning, four hours later Charles had deleted it after it was met with backlash.

The 17-year-old replaced the controversial tweet with a series of apologies, including a lengthy iPhone Notes app-style apology. “Okay, I’m NOT going to post a bullshit apology,” he wrote. “I am aware that the tweet was extremely offensive and degrading… As a white cis male, I recognize my privilege and would never want to take that for granted.” He continued, “I look forward to exploring the country and learning much more about the people and culture, because clearly I know very little and have a lot to learn.”

One problem: The apology refers to Africa as a country. (James then apologized for that with the explanation that his trip is to South Africa only.)

CoverGirl issued its own response to the remarks on Twitter, writing “James Charles’ tweet does not represent COVERGIRL’s perspective. We agree that his statements were inappropriate but appreciate that he has issued an apology. We are an inclusive brand and respect all people and cultures.”

But is the hasty apology from both Charles and the brand enough? The campaign is getting dragged on Twitter, with commenters calling for Charles to be cut from his contract
There was an Ebola outbreak throughout many parts of West Africa in 2014, with the highest concentration of cases being in Sierra Leone, Guinea, and Liberia. South Africa has only had two cases since 1974, when the Centers for Disease Control started keeping track of the disease, and only one since 1996.

Yahoo Beauty has reached out to CoverGirl for further comment and will update when we hear back.