I am no stranger to films with considerably dark themes, whether it involves delving into the sordid genius of  Lars Von Trier movies like: Melancholia and Dancer in the Dark to shuddering anticipation of the new Hellraiser remake.Oh and I may add that the more controversial the movie is touted as being the greater the hesitancy for me for me to finally view it. Graphic Horror on the other hand is often so over the top that that I have no problem watching it because I know that it’s only a movie.But some movies seem too real and and therefore emotionally too difficult to handle:

Irreversible – Depicts a violent sexual assault against Monica Belucci’s character that lasts in excess of 10 minutes – Took me 10 years from date of release to my finally gathering the nerve to watch the movie.

The same thing happened with the movie: Dancer in the Dark, actually even more time than 10 years passed before I garnered enough nerve to watch Bjiork’s award winning performance of a woman sentenced to death.

But there was a surreal quality to watching the film: The Bridge, the soundtrack was relatively soothing or at minimum not jarring or erratic.

The Bridge (2006) is a documentary that records almost two dozen leaps from San Francisco’s Golden Gate bridge and has generated praise and scorn for its maker.

The cinematography was top notch and the scenery was to say the least Epic and beautiful.The View of the clouds as they envelope the Golden Gate Bridge was absolutely breathtaking and peaceful. 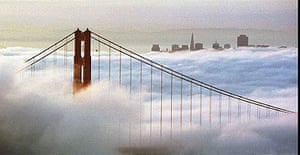 As the clouds begin to dissipate cars become visible interspersed with time-lapse views of the bridge — coursing with traffic — through gloomy, almost ever-present fog. .

For one year the cameras rolled, capturing death amid the fog and shifting tides.Filmmaker Eric Steel documented the final moments of nearly two dozen despondent men and women, and the agonizing, four-second fall after they leaped off the Golden Gate Bridge, drawn by the span’s tragic beauty.When I first saw this movie in it’s entirety, it was on YouTube of all places.  Strangely I didn’t recall seeing 2 dozen people leaping to their demise (I thank the goddess for that) I saw only 2 or 3 individuals take their final step.

What was relieving for me was to see a moment in the movie in which a photographer was photographing the bay when he noticed a young woman climbing over the edge.

He described how viewing her through the camera lens made her possibly imminent actions seemed unreal, but thankfully he realized that the woman could leap at any moment as he leaned over the railing grabbed her by the collar of her sweatshirt, pulled her to safely sitting on her until the police arrived.  This is what I wanted to see since the movie didn’t have a anti suicide theme to it.

“This is like a newspaper carrying a front-page photo of someone blowing his head off; it’s irresponsible, exploitative, voyeuristic, ghastly and immoral,” said Mark Chaffee, president of Suicide Prevention Advocacy Network-California, who has not seen the movie.His 16-year-old son took his life in 1998.

If the movie: The Bridge was to illuminate “the darkest corner of the human mind.” It fails.

The movie also consists of interviews of those left behind and are resplendent with self exonerating statements like: “Igrew up in a dysfunctional home and never tried to kill myself” to “He mentioned killing himself so often, I just tuned him out.”

Here is the thing and pay careful attention: Sometimes people can be overly dramatic, however if someone repeatedly mentions suicide you should NEVER dismiss it as a false flag.

At minimum tell them Life is still worth living, while assessing the situation, offer to get the suicidal person counseling like a suicide hotline, call the police (But be careful though because the police appear to be staffed by cowards and  now-a-days and they will probably shoot and kill the person in need of psychiatric assistance.

What is troubling to me is how despite having a camera crew on the bridge at various times.  Never was there an intervention to save any of these people.

Needless to say Eric Steel’s  project set off alarms soon after shooting wrapped in December 2004 after 365 consecutive days of filming.Officials from the Golden Gate National Recreation Area said Steel misrepresented his project when applying for filming permits, telling them he wanted to capture the grandeur of the iconic orange suspension bridge.Instead, they complain, he made what one San Francisco supervisor dismissed in media coverage as a “snuff film.”

I would argue that the movie is far from being a snuff film.  Snuff Films invariably depict some innocent person entering a situation under false pretense and being murdered while the camera rolls. There is no pretense to the actions of the jumpers.

Others say publicity over the movie prompted bridge officials to fund a $2-million study of building a pedestrian suicide barrier — a move they had long resisted. I still don’t think it’s been added to the bridge,The 93-minute documentary draws from 10,000 hours of footage, including interviews with relatives of jumpers, and with one man who survived the 25-story plunge into the frigid water.The film shows vivid footage of suicides, including a body pulled from the bay, (Another thing I did not see) and interviews with families struggling with the wreckage the jumpers left behind.

Steel tells the tragic stories of several victims — such as a 34-year-old Bay Area man depressed by his mother’s death. The film begins with footage of this man seen walking on the Bridge, stopping, looking out over the water and then continuing his journey.

Wearing a black leather jacket and sunglasses — his long, black hair flying in the wind — he is seen casing the pedestrian walkway, which he did for 90 minutes (At the least his actions were edited and interspersed throughout the film.

When I first saw the man at the beginning of the movie I thought he was a female.  Thinking this I was particularity unnerved that the filmmaker would show footage of this person who I thought was a FEMALE had no good intentions, not to say that preventative action shouldn’t have been taken to save another male, but it has been my experience to see that many men have no empathy for other men especially is they are emotionally troubled.

Also interviewed is Kevin Hines, who, in 2000, survived his jump. Now 25, he speaks freely about his ordeal with manic-depression in the hope that a suicide barrier will be built.”This film shows what a suicidal person feels like, what their family feels like,” said Hines, who has seen the movie. “It shows this happens all the time.” But for the jumpers the movie doesn’t show their feelings, it only shows their actions.

Since the Golden Gate Bridge opened May 28, 1937, an estimated 1,300 people have leaped to their deaths from the span. Officials estimate that at least 24 people commit suicide there every year.In a phone interview this week from his Manhattan office, Steel, a film producer and book editor, said he became interested in the bridge in 2003 after he read a story about its fatal attraction for the depressed.The 42-year-old New York native said he has experienced his own bouts of depression. He lost a brother and a sister — one to cancer, the other to an accident with a drunk driver.Steel said he obscured the movie’s purpose to avoid his greatest fear: “I worried word would get out, that someone would jump just to be immortalized on film. Despite criticism I did something unethical, I feel I did the right thing.”

Remember that guy who wore the black leather jacket and sunglasses — his long, black hair flying in the wind, previously mentioned?….He stepped atop the 4-foot railing, slowly turns and almost casually falls backward — as though taking a summer day’s plunge into a backyard pool.

YOU Be The Judge