In the new trailer for Amazon Studios’ Seberg, actress Kristen Stewart stars as beloved Hollywood actress Jean Seberg as she faces down the FBI in a COINTELPRO investigation.

In the late Sixties, Seberg was best known for starring as the American love interest in French New Wave films, most famously in Breathless I1960). But she became a target of J. Edgar Hoover and the FBI thanks to her support of the Black Panther Party and her affair with Hakim Jamal.

Seberg’s story in revealed through the lens of a historical thriller, following her struggle to remain afloat in her career as COINTELPRO works to take her down.  White People in POWER  certainly seem to enjoy ruining lives (Particularly Crossdresser and self-loathing homosexual) J. Edgar. Hoover, Former Director of the FBI (And until the election of Donald Trump,) J. Edgar Hoover was quite possibly the WORST Public servant in the history of the United States.

Here’s the challenge for me:  I am not a fan of Kristen Stewart. I was bored to tears by her lackluster performance in the Clouds Of Sils Maria (Great Movie Title coupled with a Dull as dishwater performance by Stewart.) Led me to vow to never watch another movie that she starred in and the fact that she ‘Came Out’ on Saturday Night Live, doesn’t earn her any brownie points with me either.  In addition I am a stickler for authenticity and ever since 2007 when Marion Cotillard channeled the spirit of Edith Piaf for her awards winning performance in La Mome, well I have a very high standard for actors now and Kristin Stewart is already off to a bad start, her hair is parted in the wrong side (Seberg parted her hair on the right side.)

Then one day while I was perusing the web, I come across the movie trailer for Seberg. Now wouldn’t you know it but Kristin Stewart is cast in the lead role. I mean it’s Jean Seberg’s story,  how can I NOT watch it?

Jean Seberg was cutting edge and WAY ahead of her time, I mean just look at her:

Don’t tell me that this look isn’t timeless because it fits in 2019. 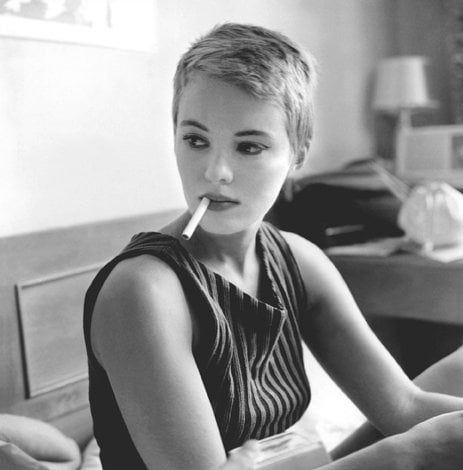 was taken yesterday.  I mean that alone is a feat within itself and what I mean when I wrote above that Seberg’s look is “TIMELESS.”

A release date for the film hasn’t been announced yet.

Jean Seberg’s beauty has always been on my radar and once I became aware of her and the anguish that she experienced it boiled my blood.

Seriously the United States in one hell of a Racist and Sexist Country, but to think that Seberg felt that she had to expose the dead body of her miscarried baby in order to prove that it wasn’t biracial is BEYOND the fucking pale and Unbelievable and makes me wish that Hoover was alive today and tried that nonsense, the number of Hollywood stars with biological biracial, or adopted children of color is enough to B!tch Slap his  racist ass back to hell.

Jean Seberg was an Iowa Cinderella story with a nightmare ending.

Seberg rose from theater productions at Marshalltown High School to international fame. She shared her fortune with social causes across the country, including in her home state.

But that generosity brought her into conflict with feared FBI Director J. Edgar Hoover, whose smear campaign robbed Seberg of her happily ever after. Seberg died 40 years ago this year and would have celebrated her 81st birthday on Wednesday.

Seberg rises from the flames

The second child of a Marshalltown pharmacist and a substitute teacher decided at 5 years old that she would become an actress. She starred in high school plays and performed in summer stock production.

1957: Rescuers attempt to help Iowa-born actress Jean Seberg while flames are being extinguished after her accidental burning at the stake on the set…
United Artists Corp.

She survived and even thrived, acting in 40 films between 1957 and 1976 alongside Hollywood all-stars including Clint Eastwood, Peter Sellers, Burt Lancaster, Kirk Douglas and Warren Beatty.

Her career blossomed in Europe after her collaboration with filmmaker Jean-Luc Godard for the cinephile favorite, “Breathless.”

Seberg grew up socially conscious. She sought to join the NAACP at age 14.

“That house was over on West Church Street, and that was not where black people went in Marshalltown back then,” Roger Maxwell, Seberg’s friend and a Marshalltown native, told the Register in 2011. “Black folks were down on North 11th Street. Marshalltown never forgave (Jean) for that house.” (Well to that I say: FUCK Marshalltown)

But a donation to her friend Hakim Jamal’s Montessori school in the Compton neighborhood of Los Angeles put Seberg in the crosshairs of the FBI.

Jamal was a member of the Black Panther Party, a far-left group that fought conditions for African Americans in Oakland, California. The group was involved in both social outreach to the poor and under-served, and violent clashes with police.

Seberg donated money to Jamal’s school breakfast program. It came to the attention of the FBI, whose agents kept files on celebrities and others who had ties to the Black Panthers.

FBI: Seberg ‘must be neutralized’

FBI agents investigated Seberg. Hoover, who was later proven to have kept illegal files on thousands of private citizens never charged with a crime, found Seberg’s association with the Black Panthers so egregious that he wrote, “Jean Seberg … must be neutralized,” FBI records showed.

The FBI would later admit that agents followed Seberg and monitored her phone. The agency also planned to plant gossip with celebrity columnists claiming the child she was expecting with her second husband, Romain Gary, was actually fathered by a Black Panther member, a major scandal in the racial climate of the 1960s.

Publications worldwide, including the Register, picked up the story.

Seberg sued Newsweek and eventually received an out-of-court settlement. But the stress took its toll. The pregnancy had been difficult. She delivered the baby three months early. The girl, Nina, died a few days later.

An angry, heartbroken Seberg brought Nina back to Marshalltown to be buried in the family plot. She insisted on a public viewing through the glass casket lid. Thousands viewed the infant’s remains.

After losing the baby, Seberg’s mental health deteriorated. Gary, her second husband, said she tried to take her own life each year on the anniversary of Nina’s death.

On Aug. 20, 1979, Seberg disappeared. French police found her in the backseat of her car 11 days later in Paris. Authorities ruled the cause of death an overdose of barbiturates and alcohol from a “probable suicide.”

She was buried at Montparnasse Cemetery in Paris.

The day after the service, the FBI revealed its role in the gossip about Seberg.

Hoover’s successor, William Webster, issued a statement: “The days when the FBI uses derogatory information to combat advocates of unpopular causes have long since passed. We are out of that business forever.”

The revelation and contrition came too late for Jean Seberg. Her parents, Ed and Dorothy Seberg, had flown an American flag outside their Marshalltown house every day.

After the FBI admitted its involvement in attempting to smear their daughter, her parents never flew the flag again (They should have burned it.)

I am only addressing this Elephant in the room because it happened, in 1983 0r 1985 Hollywood Pretty Boy Richard Gere had to be cast in the American version of Breathless (Which I did watch on VHS) because I had not seen the original version back then.  looking back I’ll take the original over the remake anytime.

Pretty Bad N’est Pas? and don’t even get me started on Gere’s co-staR Valérie Kaprisky

Portrait of a Lady on Fire – NOW-French Language ENGLISH Subtitles