Pauli Murray was a civil rights and women’s rights activist, lawyer, educator, author and poet, and the first African-American woman to become an Episcopal priest. Born in Baltimore, Murray was raised in Durham by her aunt, Pauline Fitzgerald Dame, and her maternal grandparents.

Murray wrote the part of the ACLU’s brief demonstrating the intersection of race and gender discrimination, arguing that laws differentiating on the basis of gender should be subjected to the same “skeptical scrutiny” that the federal courts were giving to similar race laws.Jun 24, 2020


Pauli Murray’s Indelible Mark on the Fight for Equal Rights 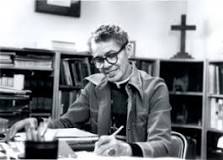 Murray was initially denied enrollment to Harvard University due to their sex (Harvard did not admit women) and went to UC-Berkeley School of Law instead. This was the type of “Jane Crow” discrimination—discrimination based on gender and on race—Murray had to face their entire life.

Pauli Murray wrote the part of the ACLU’s (American Cinil Liberties Union) brief demonstrating the intersection of race and gender discrimination, arguing that laws differentiating on the basis of gender should be subjected to the same “skeptical scrutiny” that the federal courts were giving to similar race laws.

In 1977, Pauli Murray became the first African American person perceived as a woman in the U.S. to become an Episcopal priest.In addition to being one of the founders of the National OPrganization of Women,

whose mission s to take action to bring women into full participation in the mainstream of American society now, exercising all privileges and responsibilities thereof in truly equal partnership with men.

Pauli Murray died of cancer in Pittsburgh on July 1, 1985. Their autobiography, Song in a Weary Throat: An American Pilgrimage, was published posthumously in 1987.