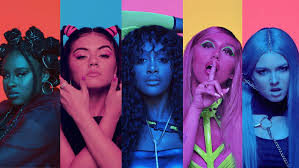 Say Hello To Citizen Queen, and I swear if I hadn’t been on this Camiila Cabello kick it may haven taken even longer for me to become aware of Kaedi Dalley,  Hannah Mrozak,  Cora Isabel,  Nina Nelson and  Kaylah Sharve’.

Pentatonix member Scott Hoying, along with arrangers and producers Ben Bram and Shams Ahmed, “hand-selected” the five members of the group. The members of the band “come from different states and different ethnic backgrounds”.

Singer and beatboxer Cora Isabel was the first member chosen, after sending audition videos to the arrangers. Bram first saw Hannah Mrozak on  “where she made it to the playoffs in 2017 as a member of Adam Levine’s and Jennifer Hudson’s teams”. Bram “reached out to Mrozak” and “encouraged her to audition” for Citizen Queen.

The members of the group were “complete strangers before the group’s founding”, except for members Nelson and Sharve’. Bram had been music director of the SoCal VoCals before participating in the formation of Pentatonix and Citizen Queen. Sharve’ had also previously released an album and performed in her home state of Texas.

The group has been identified as playing a part in the revival of girl groups in the United States. Refinery29 stated that the group “kicks down the doors with their powerful official debut, and the perfectly placed harmonies, bass, and vocal percussion on the original song all but promise a top spot for the talented newbies. Forget what you heard — girl groups ain’t dead, y’all”. Nylon described the group as “Modern representation plus Danity Kane-levels of pop ear-worminess? This is the girl group we deserve!” The group has been described as “unique because they tend to rely more on their voices rather than singing along to a beat”. Cosmopolitan compared the group to Fifth Harmony, and their origin to the movie, Pitch Perfect, noting that “after going through a cappella boot camps and auditions, the girls joined forces to create pop anthems and covers”.

Fringe noted that the group had “received praise from the likes of everyone from Ariana Grande to Meghan Trainor.  Courtesy Wikipedia